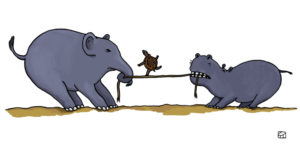 Scope for All Signs

Lucky Jupiter isn’t particularly comfortable while travelling through the realm of Capricorn – as it will be most of 2020. Here it is challenged by Saturnian matters and characteristics.  While this can prove to strengthen the quality of our accomplishments it is likely to do so in a push and pull manner.  In short, we can indeed expand our horizons but we will have to follow the rules so to speak and take it slow to ensure our efforts are expended on something that will last.

As Capricorn vibrates with Saturn hard work is encouraged, responsibility not just for oneself but in effort to keep the ‘clan’ together is, in fact, likely to be the main rhetoric of politicians this year.  That’s not a bad thing until we consider how Jupiter operates – it always wants more AND can rely too heavily on blind faith, jumping ahead too far and too fast.  That said, at a time where beliefs are clashing, polarized there are likely to be many ‘clans’ vying for power, for carte blanche under the guise of security for the collective.  In effect, the struggle for control is likely to take away from the work, time and patience it will take to make good on the promises being tossed around.  It isn’t just the U.S. although, arguably they do have a major influence in global politics which typically creates a domino effect for the rest of the world.

And so Jupiter, pushing for the bright view of what’s beyond our current structures can paint quite a pretty picture.  What politicians propose AND what we personally believe can be accomplished will make perfect sense in theory. However, the less-than palatable facts, the details of how to build outside of the norm aren’t likely to pan out smoothly in practice for any of us.  That doesn’t mean it isn’t possible, only that we’ll have to hunker down with steadfast resolve to play by rules laid out by stark realisms.

In another way, Jupiter, at times this year, will be donning rose-coloured glasses – eager to welcome in a new day.  Yet, at other times, the weight of responsibility, the actual work it will take to re-build in this ‘new territory’ can easily crush the spirit no matter how well-intentioned.  How then do we make the best use of Jupiter’s need for creating a future we can all be more optimistic about?

Well, Jupiter will still hold true to character even in this position – known as the lucky one, the abundance-maker, keen on expansion and understanding from higher morally sound perspectives can be used to our advantage.  It’s all in the timing and whether or not we are willing to learn how to work around certain realities. To be clear while under Capricorn’s gaze during 2020 the powers that be are likely to be in full force to restrict and control the faithful-seeker.  Taking on the role of ‘faithful seeker’ with grit then seems a near mandatory approach to reach whatever summit you've chosen.

In a nutshell, Jupiter will wield its well-known magic working to improve and expand our experience.  It truly does bode well wherever it travels – bringing good news to a different area of life for each sun sign.  The key to making the most of it though is to tread lightly, with awareness of where you are on the ground now and every step of the way.  Flying leaps into the pretty picture projected in your mind’s eye are not recommended – at least not for too long.  That will be the moment when Saturn’s heavy hand will yank you back down to earth – the kind of thing that leaves you on your rear end, wiping mud off your face.  Although, I’ll admit if you find yourself in this position it will leave you wiser, better prepared to side step potential pitfalls strewn throughout the year.

By the way, pitfalls and backslides for those who tread personal roads-less-travelled are more likely to arise from April onwards.  During the first quarter of 2020 Jupiter is more likely to work in our favour revealing the kind of opportunities and potentials that exist.  Keep in mind, Jupiter isn’t the only planet shaping the energies in 2020.  While it does set-up an important theme Jupiter propels but an undercurrent.

In general Jupiter’s trek through Capricorn will catalyze beneficial breakdowns & provoke boundary crossings towards new frontiers from December 3, 2019 until December 19th, 2020. The most potent aspects of Jupiter occur surrounding the following dates when:

These aspects are discussed in greater detail in your Sun Sign's 2020 MONTHLY forecasts.