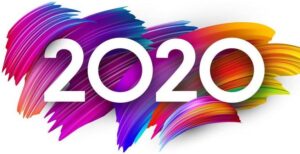 During much of 2019 it seems you have been dreaming of doing more, being more.  Chances are the universe heard your call. This year it will double down on its efforts to make sure you meet the right people at the right time to further expand those dreams. At first, it isn’t likely to feel particularly magical, much to your dismay. Jupiter your current benefactor with regard to long term goals only recently cruised into Capricorn last month.  Here, when Jupiter pushes for more with over the top optimism Capricorn steps in saying hold your horses! You have a few more ropes to learn. All in due time Pisces. Jupiter will be in your social/networking sector providing opportunities for advancement for most of 2020 - right up until December.

That said, at the opening of 2020 Mars will also serve to energize your rewards and recognition sector. However, this kind of vibe can make you feel like you have ants in your pants especially if you are poised to make important career moves.   You can and should yet indulging in the urge to do everything as quick and as boldly as possible may create unnecessary obstacles.  Mars will be in Sagittarius until mid-February suggesting the first of ropes to learn requires cultivating a little more patience – with yourself AND others.  Also, as Sagittarius resonates with Jupiter, who will be somewhat restricted under Capricorn’s gaze, Mars will, albeit reluctantly, intuitively understand that a slow and steady pace is mandatory.  That is, if you are working to achieve the kind of success that lasts.

Let’s move on to what has been the main buzz in astrological news for at least a year – The Lunar Eclipse in Cancer (part of an ongoing series of eclipses) AND the dreaded Saturn, Pluto conjunction in Capricorn.  One cannot really be discussed without the other.  The Eclipse occurs on January 10th within a few days and a few degrees in opposition to Saturn and Pluto’s meetup on January 12th.  In order to flesh out how these two aspects will manifest in your life we’ll have to take a brief detour into the past.

Transformative Pluto entered Capricorn in 2008.  It moves slowly and so its influence may not have triggered a major event immediately depending on the unique layout of your personal astrological chart.  Still no doubt you sensed a change in the air at the time.  Over the years then you may recall that you’ve become quite serious about who you choose to spend your time with.  You may have been disappointed with coworkers, ended certain friendships- eventually coming to the conclusion that you prefer the company of no fluff personality types.  In other words, you would have become increasingly attracted to groups, people, environments that were 1. serious about the work they do and/or 2. keen on cutting through the bull.  People who had/have power and authority, a strong sense of self would also have drawn your attention and respect.  As you can see Pluto has been in the process of weeding out folks in your life, those who were less than supportive or came across as untrustworthy.

Saturn, on the other hand, arrived in Capricorn relatively recently, in December 2017.  Saturn works a differently than Pluto although they do share a tone of seriousness.  Saturn practically demands we take full responsibility for how and with whom we spend our time.  It encourages taking charge for building the kind of life you want, all excuses aside.  Unlike Pluto, that tends to push permanent endings in order to provoke a rebirth of sorts, Saturn strengthens what is already in place.  It also alerts you to what isn’t stable and supportive so you can decide whether to build with it or restructure in way that weak spots work for you.  Again, it is the connections you make and break that have had the biggest influence on your life with Saturn & Pluto in this area of your chart.

On January 12th when they meet arm and arm if you have heeded their warnings, taken matters into your own hands and decided what you will and will not tolerate (from yourself or others) this aspect can be a powerhouse of positivity.  Respect earned is respect gained.  If there is something or someone you still need to separate yourself from chances are the universe will step in to do it for you.  This can easily have an effect on your finances, investments, daily earnings etc.

The Lunar Eclipse in Cancer is bound to echo the same message.  However, its focus is likely to be on one particular relationship.  For instance, if you and your partner have been tiptoeing around the word divorce or money is point of contention, the Eclipse will draw it up and out to be handled.

It may be useful to look back at events during the eclipses in 2018 and 2019 -also part of the Capricorn/Cancer series. Each Eclipse spans an influence of six months.  Every ‘shift’ that occurs feeds into the type of experience likely to manifest during the subsequent eclipse.  Here is the list of eclipse dates in this series.

Other significant happenings in January may pale in comparison to the pressure aroused by the Eclipse and the joining of Saturn & Pluto.  Still they are worth mentioning as they do have potential to wave in a welcome change in atmosphere.

On January 11th ‘the great awakener’ Uranus stations direct in Taurus. Taurus governs your third house of communication, short trips, friends and the everyday stuff we often take for granted.  As Uranus can behave somewhat erratically words can fly out of your mouth either 1. shocking others 2.inspiring them OR a little bit of both!  Either way, your powers of communication will be strong.  Needless to say, you can create quite the buzz.  Considering how the other planets are arranged this month social media, publishing endeavours or technical tasks can also work out better than expected.

Moving on…Lovely Venus enters your sign on January 13th to stay until early February.  This is one of the best placements of Venus AND for you.  People may comment on how good you look and you this may inspired you to spruce up even more. Who doesn’t love as you positive attention?

Lastly, mid-month Mercury and the Sun grace Aquarius on the 16th and 30th respectively.  The cosmos will send a decisive signal that it is time to slow down Pisces.  You may have been able to keep the pace for the first half of the month but you will undoubtedly need a little extra rest now.  Also, a New Moon in Aquarius on the 24th can be a bit jarring. If you have indeed been burning the candle at both ends your nerves will speak up.  Uranus sits at a tough angle to the New Moon.  You know you’re pushing too hard if find yourself tripping up on words, misunderstanding words received or even run into mishaps as you run along your routine. It is the type of thing where you press on the gas instead of the brake or reverse into the garage door.

All in all, January looks like a fantastic month – as long as you are paying attention to the little things you love, managing to make time for friends and maintain a reasonable pace.  Happy New Year Pisces – 2020 is set to be a great one.